„The only thing necessary
for the triumph of evil is
for good men to do nothing.”
/Edmund BURKE,
Irish politician 1729-1797/ 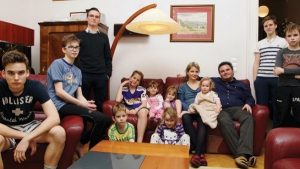 Familiaris Consortio (FC) was published on the Feast of Christ the King on 22 November 1981, so in 2021 it was the 40th anniversary of its publication. Saint Pope John Paul II, although he addressed his letter to the Catholic Church, calls on all Christians, and even people of good will, to unite in the defence of the family: „I wish to call on all Christians to collaborate cordially and courageously with all people of good will who are serving the family in accordance with their responsibilities.” (FC no. 86.)

The apostolic exhortation Familiaris Consortio (FC, 1981), written by Saint Pope John Paul II, defines the four fundamental tasks of the family, which are:

In the previous two articles, the first two basic tasks – forming and maintaining a community of persons and serving life – were discussed.

Since the Creator of all things has established conjugal society as the beginning and basis of human society and, by His grace, has made it a great mystery in Christ and the Church (cf. Eph. 5:32), the apostolate of married persons and families is of unique importance for the Church and civil society. Christian husbands and wives are cooperators in grace and witnesses of faith for each other, their children, and all others in their household. They are the first to communicate the faith to their children and to educate them by word and example for the Christian and apostolic life. They prudently help them in the choice of their vocation … (AA no. 11.)

This mission – to be the first and vital cell of society – the family has received from God. (AA no. 11.)

It has always been the duty of Christian married partners but today it is the greatest part of their apostolate to manifest and prove by their own way of life the indissolubility and sacredness of the marriage bond, strenuously to affirm the right and duty of parents and guardians to educate children in a Christian manner, and to defend the dignity and lawful autonomy of the family. They and the rest of the faithful, therefore, should cooperate with men of good will to ensure the preservation of these rights in civil legislation and to make sure that governments give due attention to the needs of the family regarding housing, the education of children, working conditions, social security, and taxes; … (AA no. 11.)

In just a few sentences, Familiaris Consortio refers to what makes the family a vital cell of society: “it is from the family that citizens come to birth and it is within the family that they find the first school of the social virtues that are the animating principle of the existence and development of society itself.” (FC no. 42.) This clearly shows that the family alone is capable of reproducing the humanity in a natural way, in a way that is accepted and willed by God. It is only here that human life in all its goodness – as a result of the mysterious cooperation of mother and father and God – can come into being. As Familiaris Consortio says: „God … calling him to existence through love, He called him at the same time for love.” (FC no. 11.) In addition to the service of physical life, the service of spiritual and moral life is another important task of the family for society and the Church. They form the spirit of the social community in their children when they develop in them the social virtues (e.g. respect for the human person, respect for life, justice, service to fellow human beings, service to the common good, etc.). But equally important is age-appropriate support and nurturing for an intimate relationship with God in the faith and spiritual sphere. Familiaris Consortio emphasises that the formation of sexual identity and the development of sexuality according to God’s plan, as well as preparation for marriage and family life, are particularly important tasks of the family ministry today (40 years since it was written!). (cf. FC no. 11.)

Familiaris Consortio says of the humanization of society: “The family is thus, … the place of origin and the most effective means for humanizing and personalizing society” (FC no. 43.)

Already in 1949, Pope Pius XII stressed that it is an important opportunity and responsibility for families to form associations (cf. Pius XII to the Congress of the International Union of Associations for the Defence of the Right to the Family, 20th September1949. AAS 41 (1949) 552. p.)

The social service of the family is also based on the union of love between a woman and a man, marriage, from which the family grows. In addition to the creation and maintenance of the family community, the physical and spiritual birth and growth of children, the family has many other opportunities to serve society. It can bring its talents to bear in many areas of social life: e.g., social, educational, lifestyle, economic. The importance of protecting the family stands out, which is an unexpected challenge for families today. In this regard, it is worth mentioning the Charter of the Rights of the Family issued by Saint Pope John Paul II in 1983 or the Convention on the Rights of the Family (CRF) drafted by the Ordo Iuris in 2018, and the Compendium of the Social Doctrine of the Church issued by Saint Pope John Paul II in 2004, which can be studied and then put into action.

The family, as a living organism, is endowed with outstanding opportunities and responsibilities according to God’s plan to serve life, WHOLE LIFE. To this mission, it can be of great service if families organise themselves into communities and alliances, so that they can use each other’s gifts synergistically and represent a greater social potential in the causes they represent.

Society’s fundamental duty is to protect and respect the family. This fundamental task can be fully carried out by society – and thus by the work of government in support of social life – for the benefit of families and society, along the lines of the principles and core values of the Church’s Social Teaching. This implies open, ongoing, and family-centred communication and implementation systems, which should include joint evaluation and proactive improvement. The protection of the family and its life must be placed in the legal order, above all in the constitution or the basic treaty. This was also the request of Saint Pope John Paul II in 2002 in his address to the 20th anniversary celebrations of the John Paul II Institute. In addition to the law, there are many other areas in which the State and society can be of service to the family and “the good of the family is an indispensable and essential value of the civil community, the public authorities must do everything possible to ensure that families have all those aids –  economic, social, educational, political and cultural assistance – that they need in order to face all their responsibilities in a human way.” (FC no. 45.)

The relationship between the state and the family must be characterised by the principle of subsidiarity. This means that what the family can do for itself, the state should not do for it. Rather, the state should seek a form of assistance that increasingly enables the family to fulfil its basic tasks (cf. FC no. 17 and point 1. of this article) to the highest possible level.

As can be seen from various studies, cultural phenomena and manifestations (cf. the Declaration of 14 religious’ denominations in defence of marriage, family and human dignity, 9 December 2021), Christian marriage and family face increasing resistance if they want to fulfil their social mission. A new and much deeper commitment is needed in every family today, so that in the national and international space, man can still be conceived, live, and die in the fullness of his God-given nature. Each family, as a family church, is on a mission to proclaim the victory of love and loving God in a God-hostile world.

When the UN, the United Nations, was founded in 1945, after the Second World War, it was imbued with the teachings of Christianity and was a secular auxiliary to the social teaching of the Church. Today, this organisation has strayed quite far from its roots and in many cases is acting against humanity and the common good. We are seeing a similar drift in the European Union, which was created by Christian Democrats for a more humane world. In view of these facts, it is understandable why the Familiaris Consortio formulates the following about the social service of families: “the family has seen its role with regard to the development of society extended in a completely new way: it now also involves cooperating for a new international order … The spiritual communion between Christian families, rooted in a common faith and hope and given life by love, constitutes an inner energy that generates, spreads and develops justice, reconciliation, fraternity and peace among human beings.” (FC no. 48.) To this end, we have launched the Christian Family Mainstreaming social mobilisation, the essence of which is that every social, economic, political and cultural decision should serve the good of the family.

We ask you to support this ministry with your prayers and all possible means for the common good of the family.